Volunteer to help us win!

Get in touch with Jack Caldwell

Local resident Jack Caldwell is our May 2022 Council candidate for Leith Walk ward, after doubling the Lib Dem vote in the 2019 Leith Walk ward by-election.

Jack Caldwell, 28, has lived in a council flat in the heart of the Leith Walk Ward since he was four years old, in 1997, attending the local schools, Boy’s Brigade and Scout troop. Jack’s workplace is just off Leith Walk, where he is an IT technician for a local independent arts charity.

Jack is an active volunteer in the area, running a local Cub Scout troop, as well as being an active member of the local Leith Community Council, which has recently seen him standing up to profit-driven developers. In this role he is working constructively with people and organisations across Broughton, Bonnington, Abbeyhill, Pilrig, Easter Road, Hillside, Powderhall and Leith.

It’s a privilege to be given the opportunity to stand up for Leith Walk. Being actively involved in the local community, it is distressing to see the negative impact that eight years of roadworks are having on our area. In addition, the council has completely mismanaged recycling and refuse. We residents are being very patient, but our living standards are suffering from the dust, noise, strewn litter, and traffic jams are increasing across the ward.

It’s time we stopped utility companies running wild with public pavements, roads and cycle lanes. We deserve to be able to go to work or the shops without finding out our bus stop has moved to a totally different place again!

It is shameful that in 2022, North East Edinburgh still has unacceptable areas of financial inequality, with Leith Walk having a 21% material poverty rate alone. We can’t afford to have vital services such as Devolved School Budgets Community Policing further cut by our council.

If elected, my top priority will be to work hard to ensure community resources and charities receive enough funding to continue serving local residents. I will also explore as many options as possible to reduce inequality and attract high quality, sustainable, accessible and integrated social-rent housing to the area.

Please get in touch with him if you have any local issues you'd like us to campaign for and let him know if you can help us to deliver our free Focus newsletter in this area. 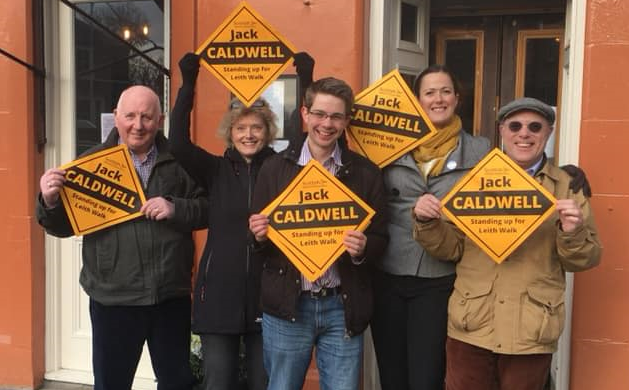 Get news by email from Jack Caldwell in Leith Walk. Sign up today: