Talks are resuming at 3pm today between the Scottish Government, Councils across Scotland and Trade Unions while there are front-doors across our communities with rubbish overflowing into them. The plaintext of the letter is below the image: 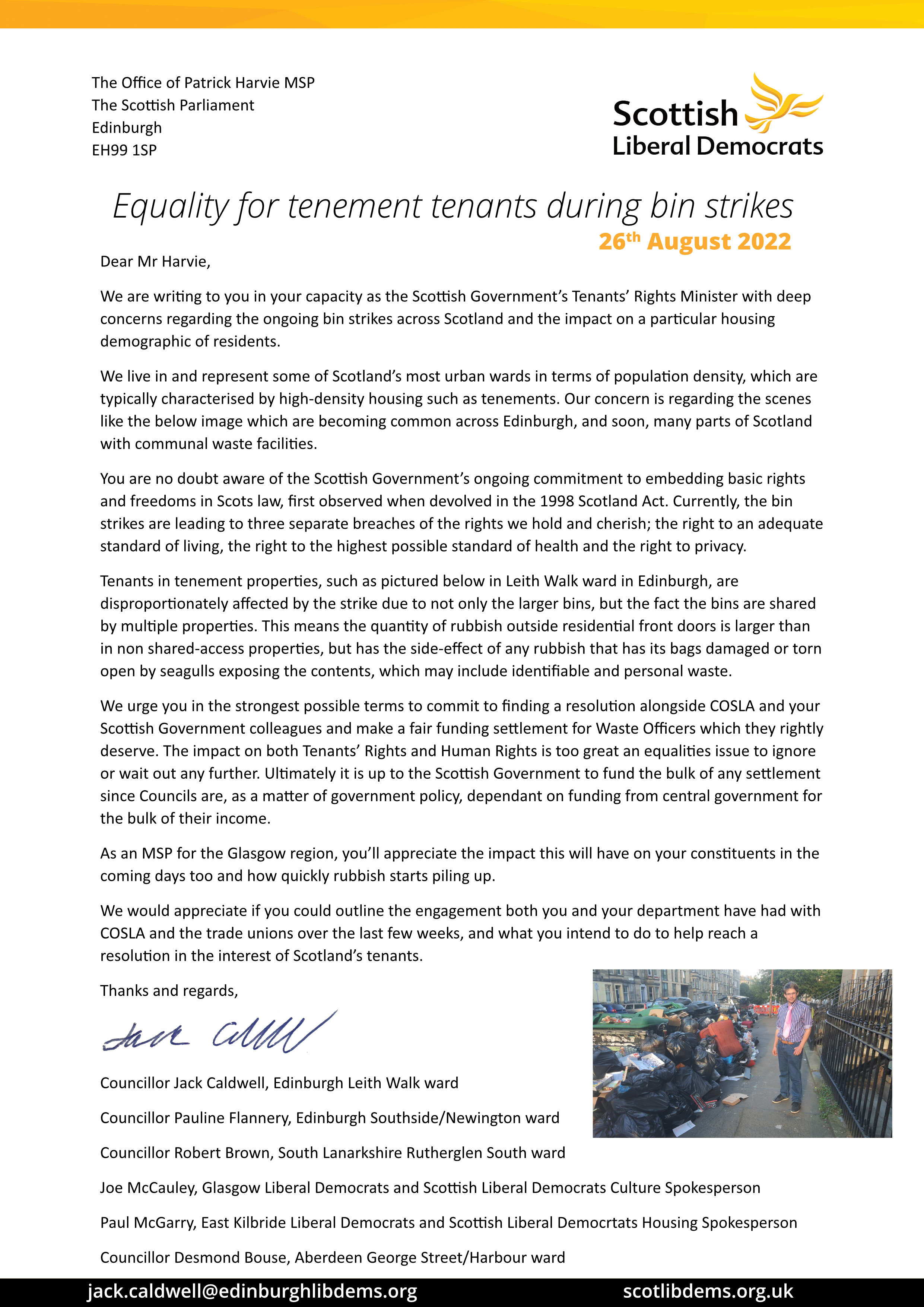 We are writing to you in your capacity as the Scottish Government’s Tenants’ Rights Minister with deep concerns regarding the ongoing bin strikes across Scotland and the impact on a particular housing demographic of residents.

We live in and represent some of Scotland’s most urban wards in terms of population density, which are typically characterised by high-density housing such as tenements. Our concern is regarding the scenes like the below image which are becoming common across Edinburgh, and soon, many parts of Scotland with communal waste facilities.

You are no doubt aware of the Scottish Government’s ongoing commitment to embedding basic rights and freedoms in Scots law, first observed when devolved in the 1998 Scotland Act. Currently, the bin strikes are leading to three separate breaches of the rights we hold and cherish; the right to an adequate standard of living, the right to the highest possible standard of health and the right to privacy.

Tenants in tenement properties, such as pictured below in Leith Walk ward in Edinburgh, are disproportionately affected by the strike due to not only the larger bins, but the fact the bins are shared by multiple properties. This means the quantity of rubbish outside residential front doors is larger than in non shared-access properties, but has the side-effect of any rubbish that has its bags damaged or torn open by seagulls exposing the contents, which may include identifiable and personal waste.

We urge you in the strongest possible terms to commit to finding a resolution alongside COSLA and your Scottish Government colleagues and make a fair funding settlement for Waste Officers which they rightly deserve. The impact on both Tenants’ Rights and Human Rights is too great an equalities issue to ignore or wait out any further. Ultimately it is up to the Scottish Government to fund the bulk of any settlement since Councils are, as a matter of government policy, dependant on funding from central government for the bulk of their income.

As an MSP for the Glasgow region, you’ll appreciate the impact this will have on your constituents in the coming days too and how quickly rubbish starts piling up.

We would appreciate if you could outline the engagement both you and your department have had with COSLA and the trade unions over the last few weeks, and what you intend to do to help reach a resolution in the interest of Scotland’s tenants.
Thanks and regards,